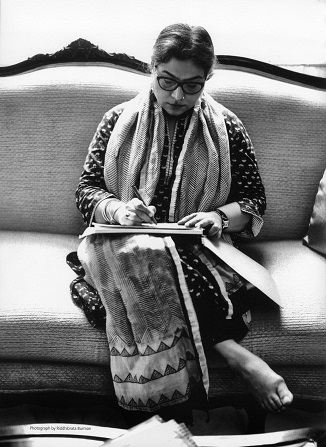 Jayasri Burman is a contemporary Indian artist born in Kolkata in 1960. Her formal training in art took place in Kala Bhavan, Santiniketan. She is an exponent of the mythical, miniature and the modern, in her universe of art fables. Rooted in her fond memories and stories of childhood, the essence of her paintings derives their vibrance from the myriad rituals and festivals, and their alluring impressions. Burman is an artist who has been shaped by her manifold experiences and the roots she has flown out from. These process the creation of her art and serve as the pillars of her verity and integrity.

In her works, she recreates the universe of mythological entities, which her paintings bring to life. In such a canvas of informed imagination, she expresses the spontaneity of her mind.

Along with many solo shows, she also has a series of dedicated publications -Mythical Universe and Antaryatra – to her credit. She has exhibited across India and abroad thus establishing the popularity of her work in Singapore, Hong Kong, Switzerland, London, Germany, Tokyo, New York, San Francisco and many other countries.

Jayasri is a warm soul and a passionate artist, working and stringing together the fantastical world of her studio. Her style of work is a lyrical weaving of stories in watercolour, pen and ink and other mixed mediums which permeate beyond her canvases into lives that can connect with her art. One of her prized achievements has been a series of commemorative stamps with her works by the Government of India, released on the occasion of International Women’s Day in 2007. In 1985, she was the recipient of the National Award. Recently, she was invited at the President’s House as an Artist-in-Residence and she also won prestigious awards such as ICON and Devi Awards.